Limb Differences: What is it like to have a child with a prosthetic or AFO? 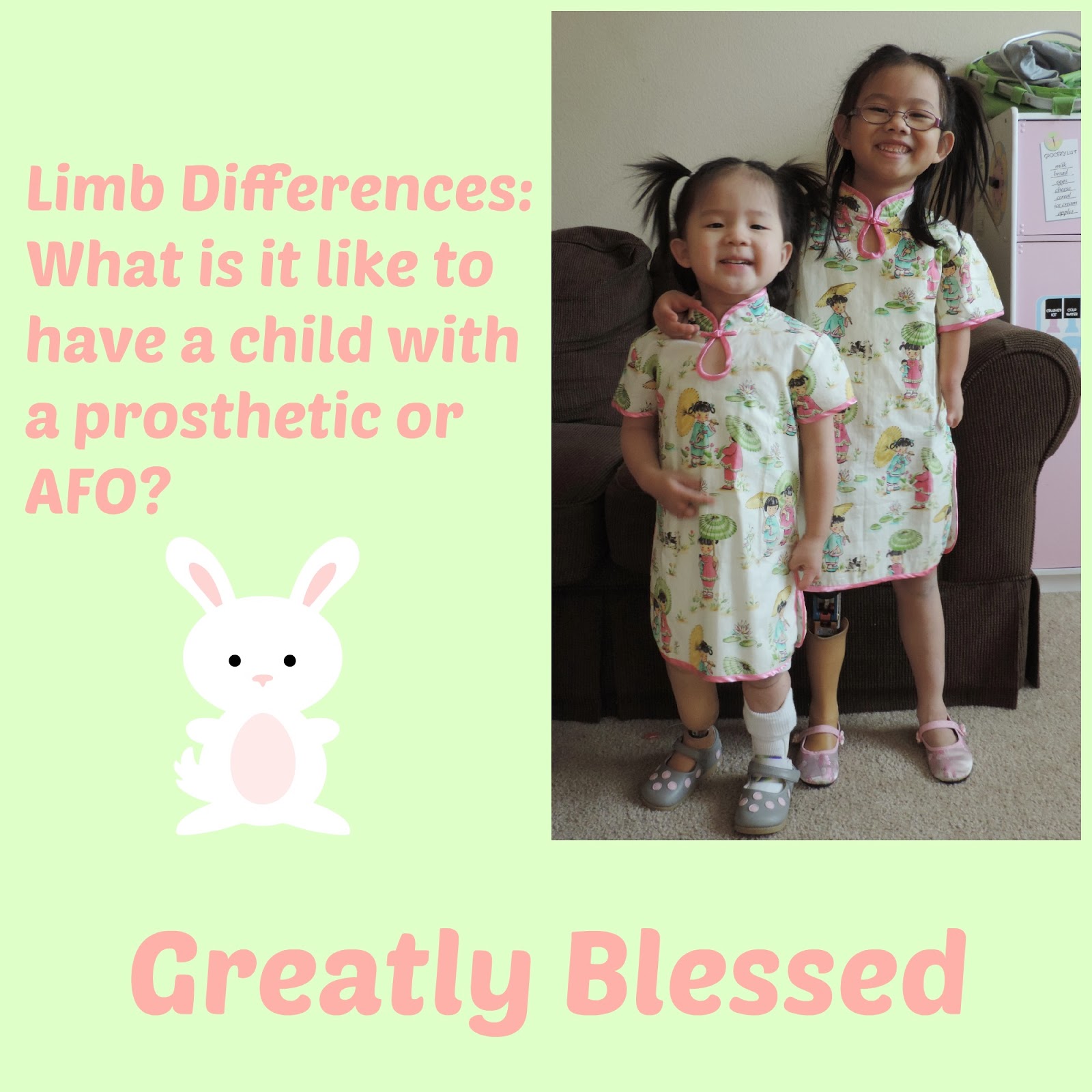 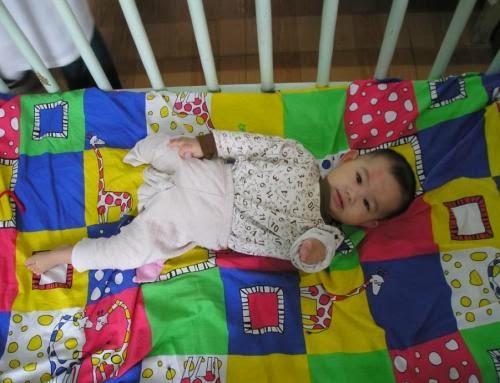 Prior to adopting Hannah, I wondered what it would be like to have a child with a limb difference.  I mistakenly assumed we'd be bringing home a "poor little waif" who would need lots of help.

The reality is, for our family, bringing home our girls with limb differences has involved a flurry of medical appointments in the first few months, and then one ongoing issue afterwards.  We'll get to that in a minute. 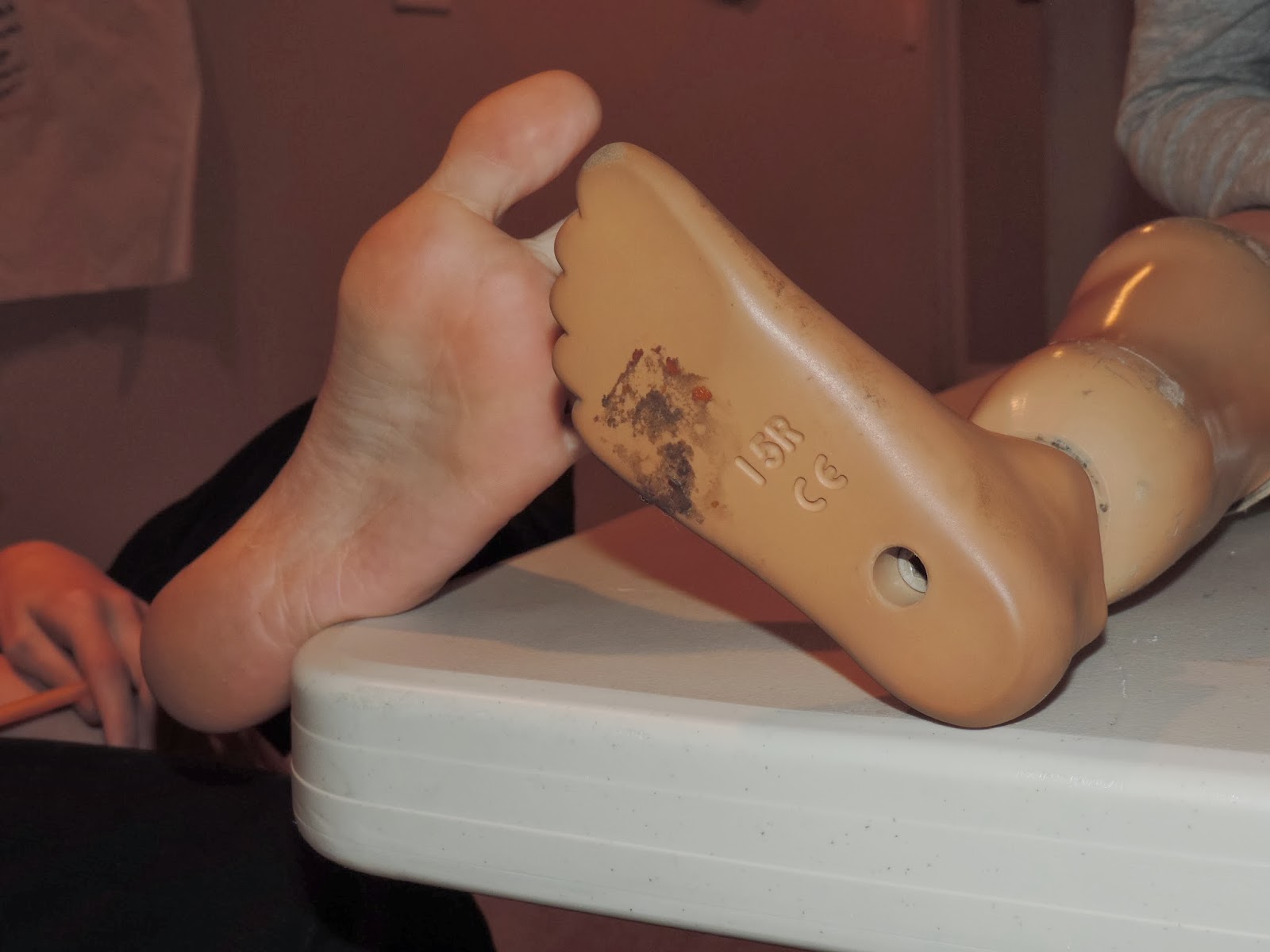 There is a little learning curve that goes along with prosthetics.  For example, I sometimes forget that the girls' feet don't get washed with the rest of their bodies.  That's Katie's foot next to Eli's.  Fortunately, whatever that was came off with a diaper wipe. 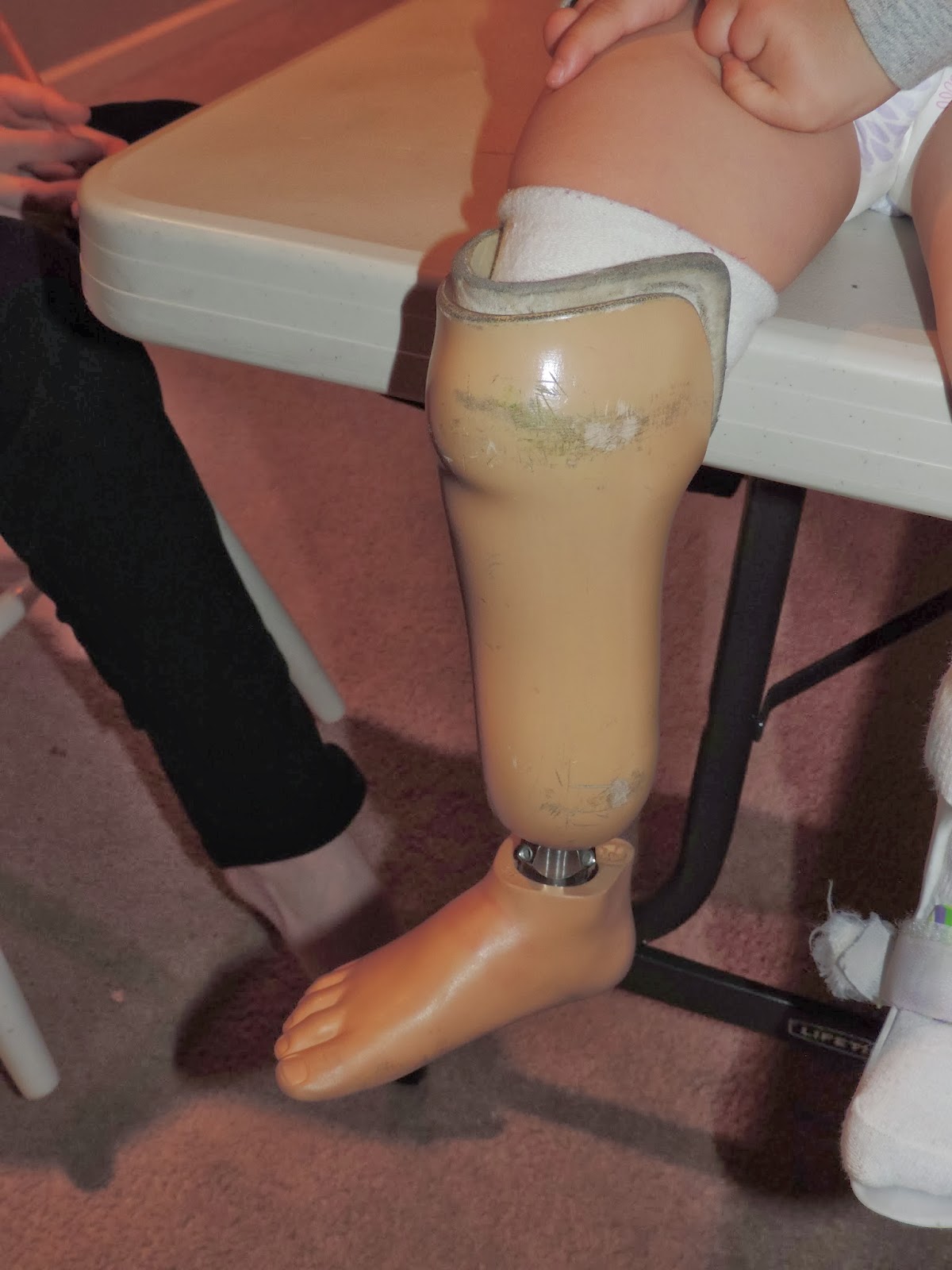 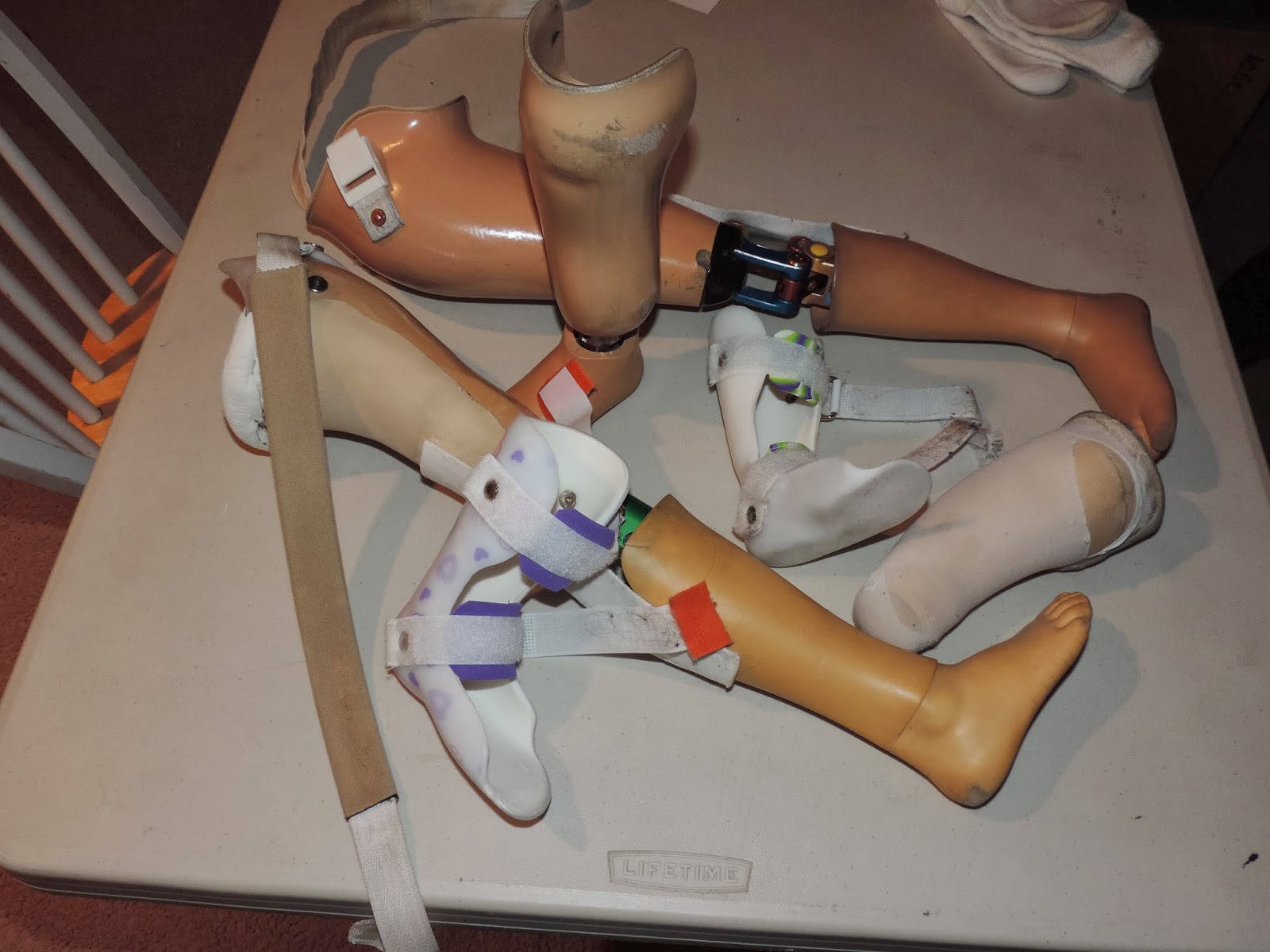 Hannah's leg has a belt that goes around her waist to help it stay in place once it's on, and Katie's pinches around the top of her knee. 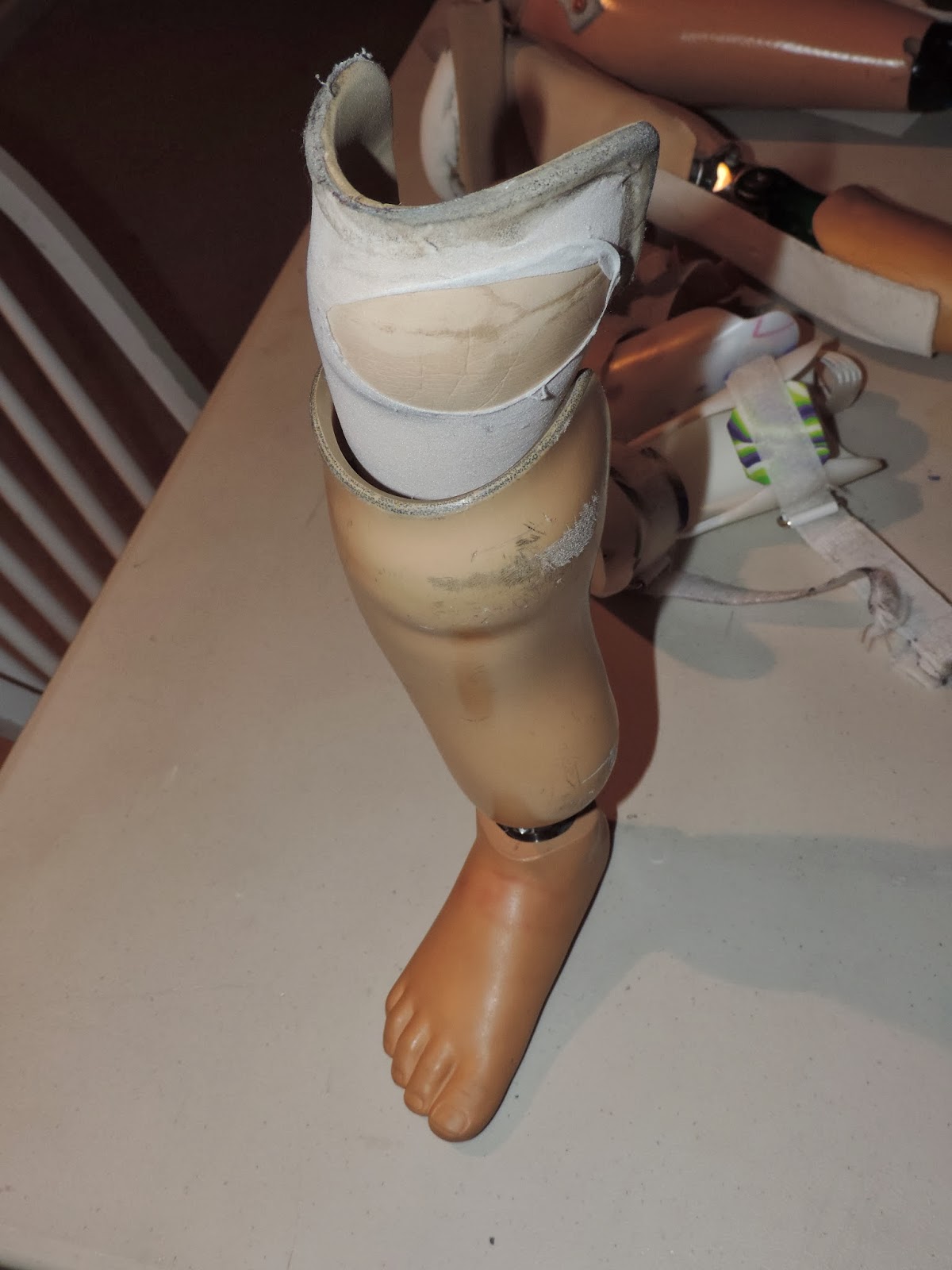 Katie's leg has a separate liner that we put on her stump before we slide the leg on. 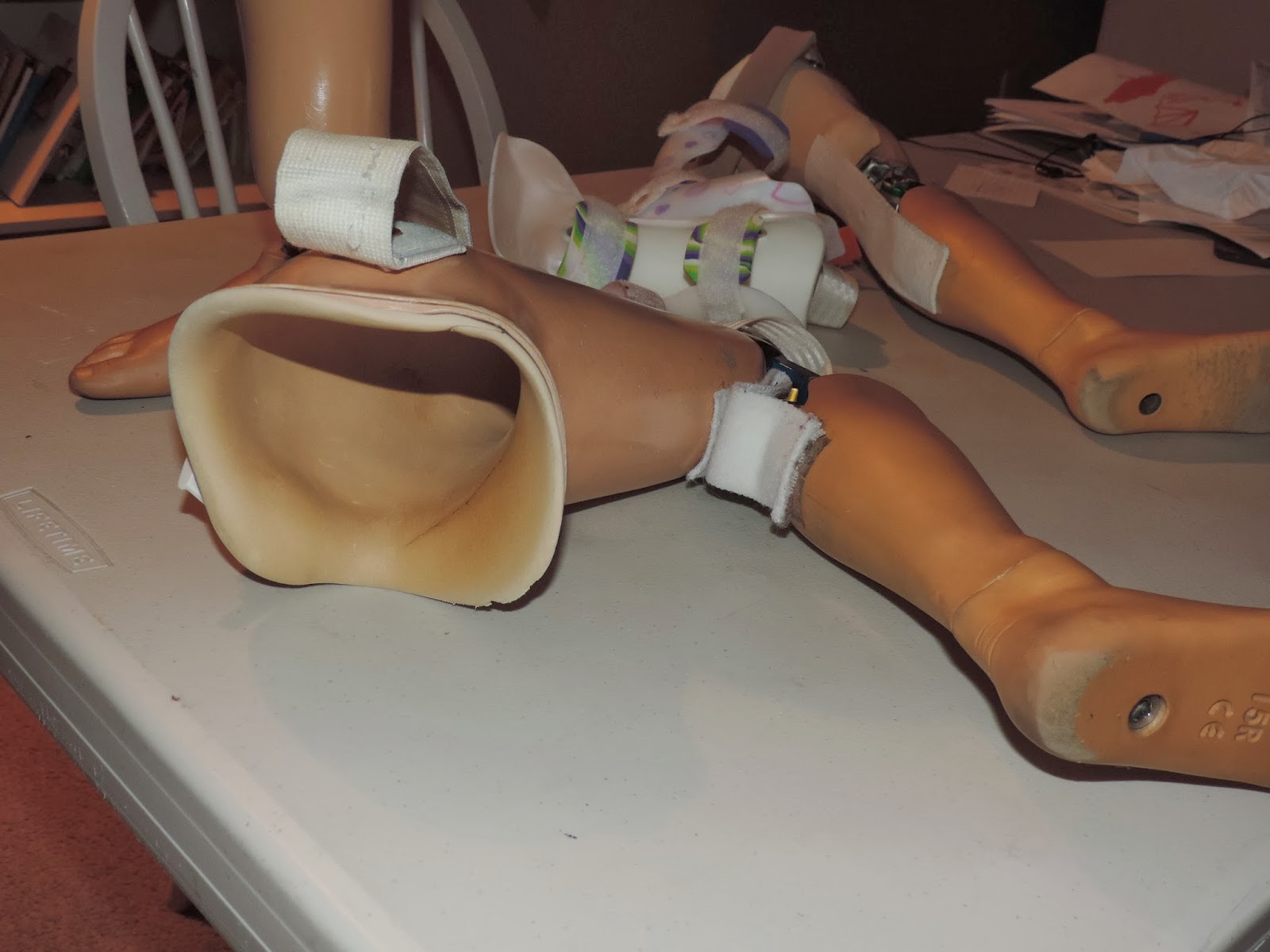 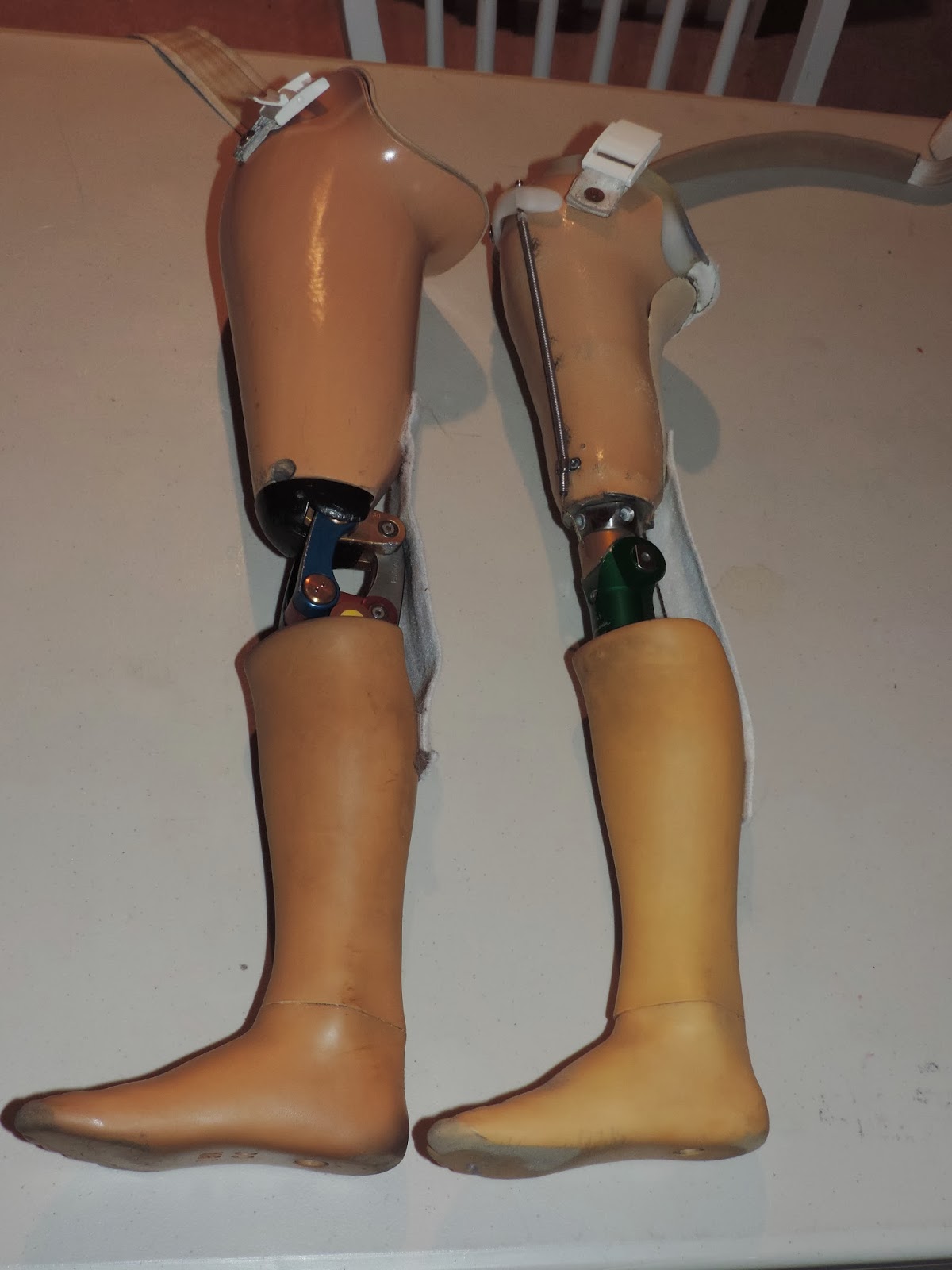 Hannah's old leg on the right, new leg on the left.  They have different knee mechanisms.  She's gone through about 3 feet, upgrading size as necessary, on the old leg.  It has also "grown" a couple inches since she got it, so the difference between the two is not as obvious as it would be if she had the original foot, and the original length of the old leg. 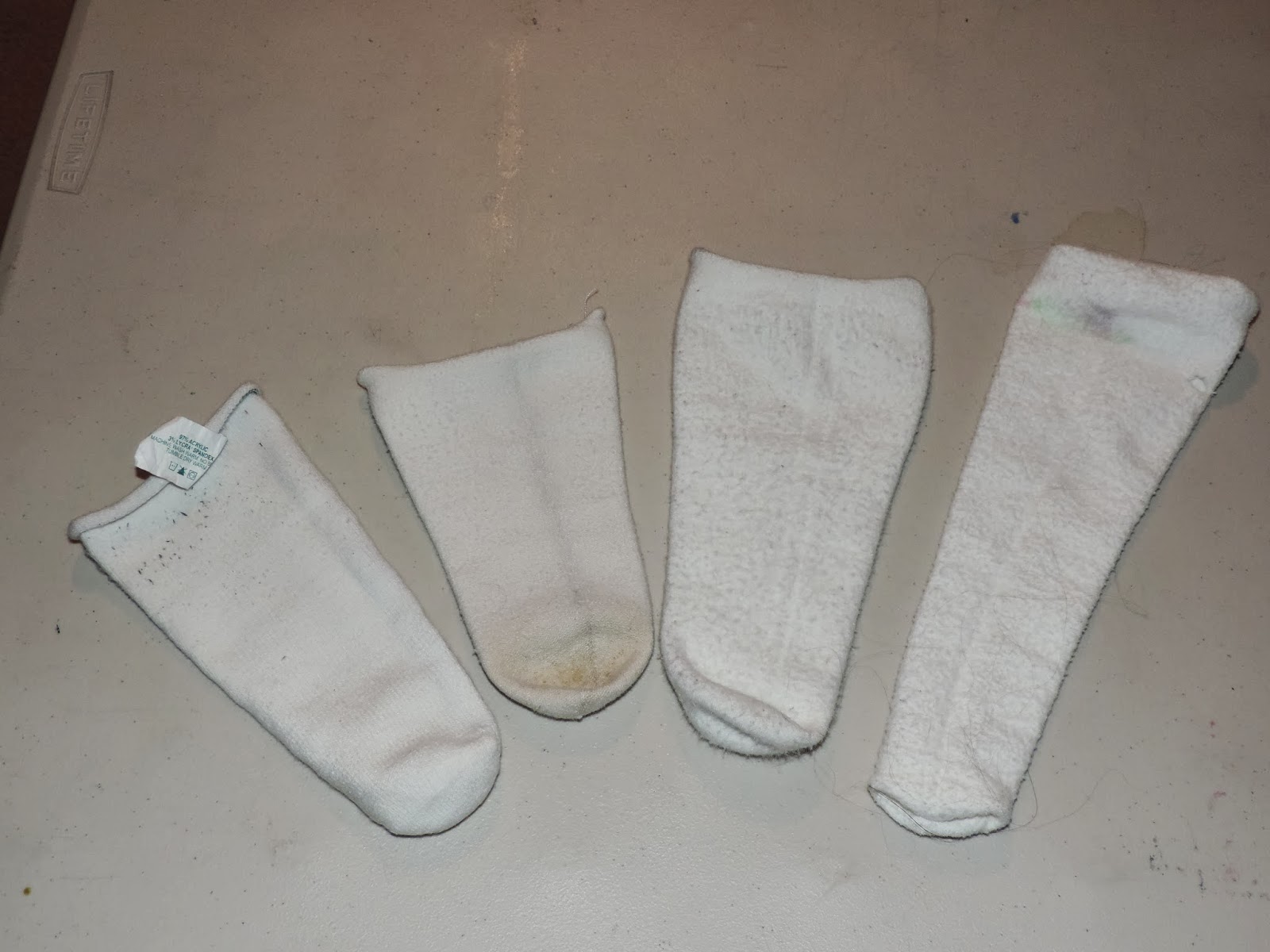 These are stump socks.  They go on the stump of the limb before the prosthetic (or in Katie's case, before the liner).  They come in a variety of sizes and thicknesses.  Counting left to right, Katie is currently using the first ones, Hannah is using the third ones.  There's a little trial and error involved in figuring out which work best. 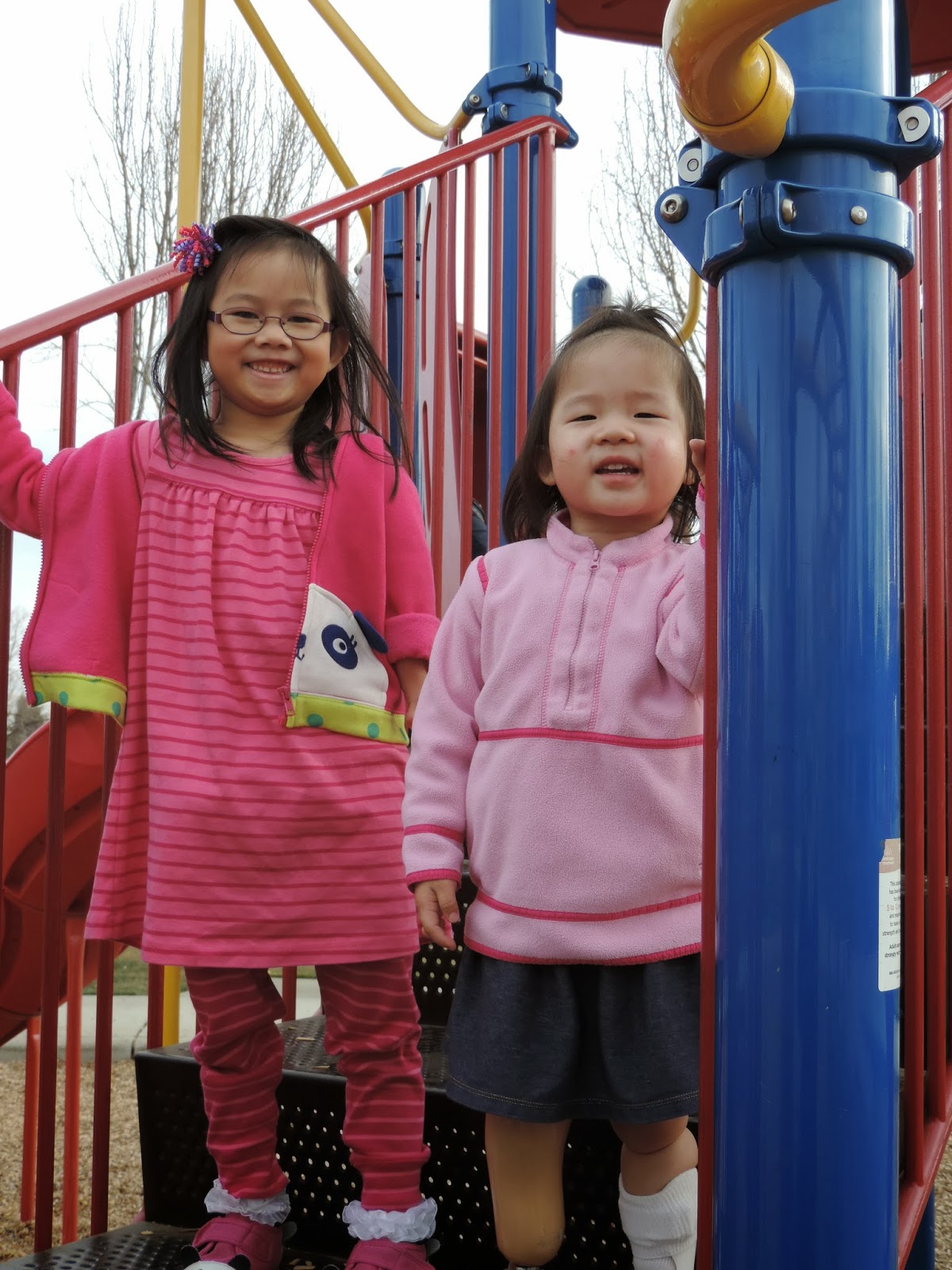 Both girls are able to don and doff (put on and remove) their prosthetics on their own, despite having hand differences as well.  I just started letting Katie do her own in the last few weeks.  At bedtime, she undresses and takes her leg and day brace off.  I change her diaper and the sock she's wearing, and she can put on her own pajamas and night brace. 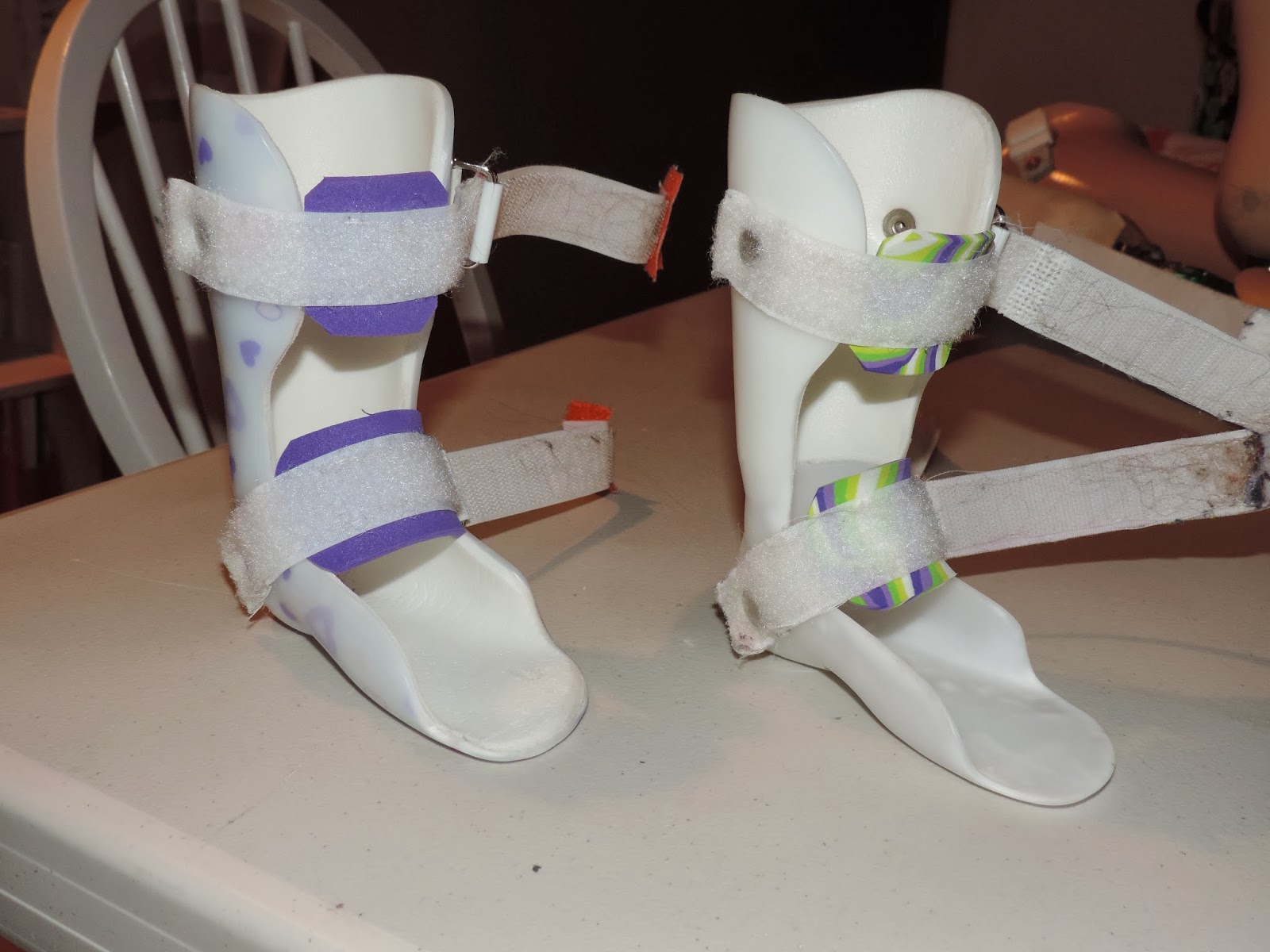 I was used to the prosthetic scene, from Hannah, but Katie has introduced me to a whole new world:  AFOs.  AFOs are worn, not only by kids with clubfoot like Katie, but also kids with cerebral palsy, and occasionally other conditions, as well.  That's Katie's night AFO on the left and her daytime one on the right.  She's currently in her brace 24/7, aside from baths.  Most kids wean down to nights only by around age 5. 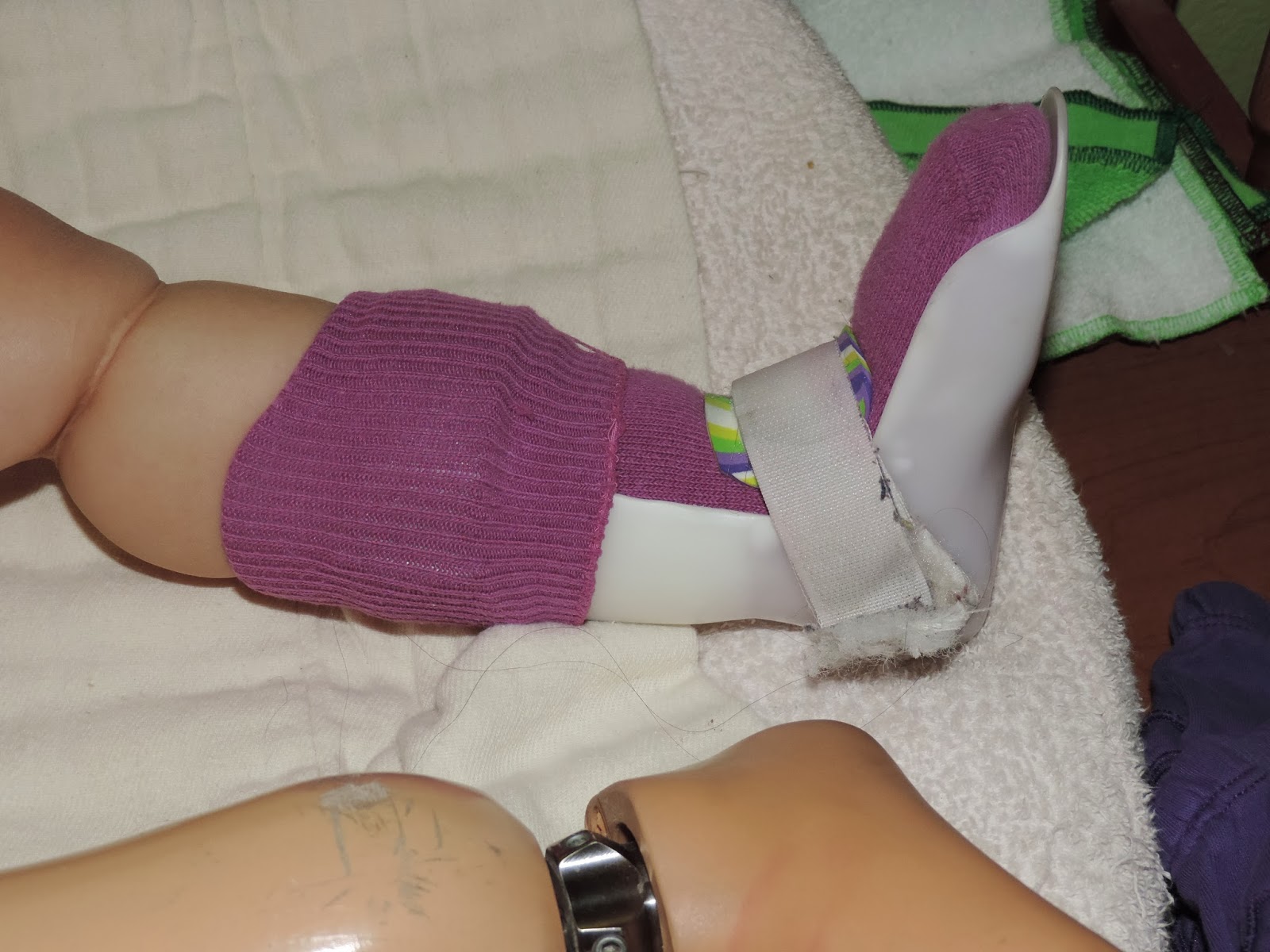 I have talked before about the need to find long socks for her to wear under the AFO.  At some point after that post, I realized that if I folded the top of the long socks down over the velcro tab, the velcro wouldn't get caught on her leggings.  So, for toddler sized feet, Old Navy triple roll socks are the way to go, in my book.

Now for that ongoing issue that I mentioned at the beginning of the post.  What is the toughest day to day aspect of having a child with a prosthetic or AFO?

And yeah, that sounds shallow.  But the reality is, this is something I didn't realize would be an issue.  By sharing this with prospective adoptive parents, I hope to help them be more prepared than I was.

So what are the clothing issues?
1) Hannah's prosthetic is larger in the thigh area than her real leg is.  This means that leggings look lumpy and lopsided on her, and she doesn't fit into girl jeans. 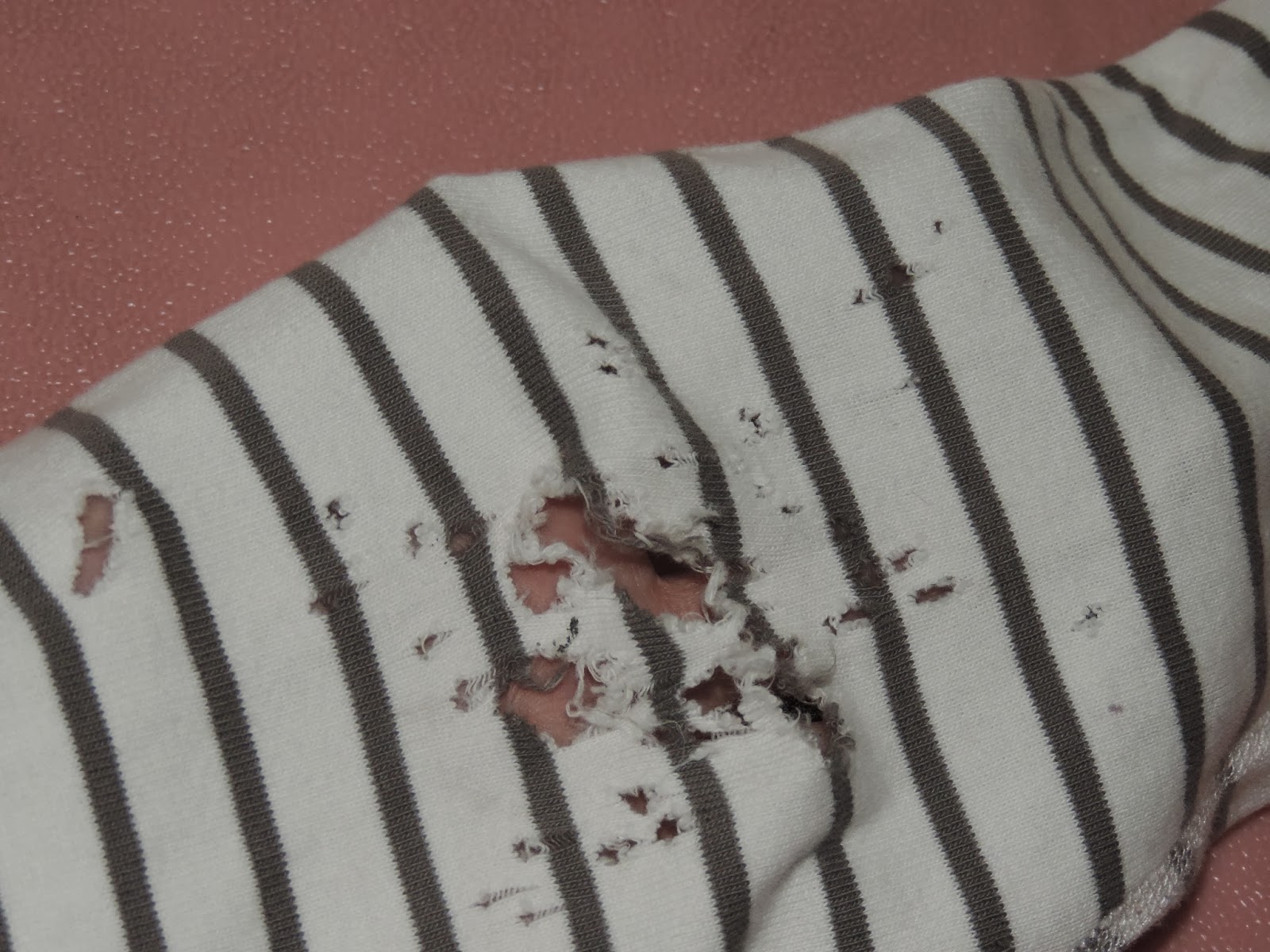 2) Hannah's knee tears fabric.  These are high quality leggings bought new in October.  Trashed.  I think I've shown pictures here before of the same thing with her jeans when she was younger.

3) Katie's AFO takes up a lot more shoe than a typical foot does.

Here's how our family deals with these things:  I tend to dress Hannah in boy jeans, skirts, or leggings with long tunic tops, tulle skirts or dresses that cover the thigh area.  She absolutely can't wear tights at all.  I tried putting tights on Katie once, and they look pretty silly on her, too.  Between the lumpy prosthetic on one side, and the lumpy AFO on the other, she does better in straight leg pants than leggings, as well.

We asked our prosthetist to put a larger foot on Katie's leg.  This means that now she can wear a pair of shoes that are the same size.  Her prosthetic foot is much larger than her real foot, so if we do wean down to where she only wears AFOs at night, we may have to switch to a smaller foot at some point, but we'll cross that bridge when we come to it.

There you have it, in a nutshell.  The most difficult part of raising a kid with a limb difference is not that they need tons of help or that they're unable to do what their peers do.  It's that you have to think a little before you buy their clothes.  I can live with that.