A Life in Balance

When I first read about this book, I was interested in reading it for Luke's sake.  However, once I started reading it, one of my other children came to mind... A Life in Balance was an interesting book to review.  It tells the story of Frank Belgau's life, and his life work, which was teaching special education children--really teaching them, coming up with ways to help them learn.  Not just classroom management.

Frank eventually founded Learning Breakthrough Program to help "minimally brain injured" children learn to read, or read better, and succeed in school.  The price for the book A Life in Balance is $16.94, and I would recommend it for parents, teachers, or therapists.

It was neat to see how Frank's early experiences in the Air Force shaped him to be well suited to his exploratory work with children.  After his time in the Air Force, where he met people who influenced his thinking, Frank found himself teaching elementary school in Texas.

During the 1960s, kids who fell behind were dumped into a special class and given up on.  Frank stumbled upon these kids almost by accident when he offered to take the "special class" kids for art in his room so their regular teacher could get a little break.

Once he started working with these kids, he made observations and started asking questions that launched him into a fascinating career, working with children with a variety of learning challenges:  dyslexia, autism, Down syndrome, ADHD, and more.

It was an exciting time, academically, to be doing this sort of work.  Researchers were just beginning to understand the vestibular system, and newfangled ideas like vision therapy were popping up and proving useful. 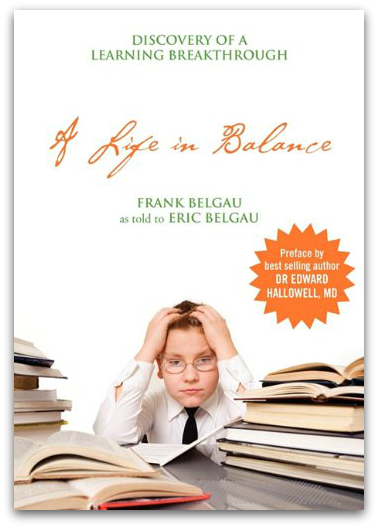 Over the next several years, he slowly discovered these formerly written off kids had physical manifestations in common, and certain gross motor activities actually helped them read better.  He would have a child read into a recorder, do a special exercise, and then read into the recorder again.  The second reading was better!

In time, he came up with a series of exercises, originally designed to help struggling children learn to read, which he discovered could also benefit victims of brain injuries, and senior citizens.

He tested his program on groups of children in a summer day camp type setting, and parents were excited by the results.  He began travelling and sharing his findings around the country.  He also developed a "kit" families and therapists could buy to implement the program, which included a balance board, a colored stick, a ball on a string, and other supplies.

At the beginning of my post, I said that reading this book made me think of one of my other children.  As I've mentioned, Jack has had challenges in learning to read.  I was impressed enough by the success stories in the book to purchase a balance toy when one came up on Zulily, and to put him through some of the exercises.  Luke, on the other hand, is not a good candidate for the program, because he's non ambulatory, and kids need to be able to stand and walk to participate.

You can read what other Crew moms had to say about this book here: