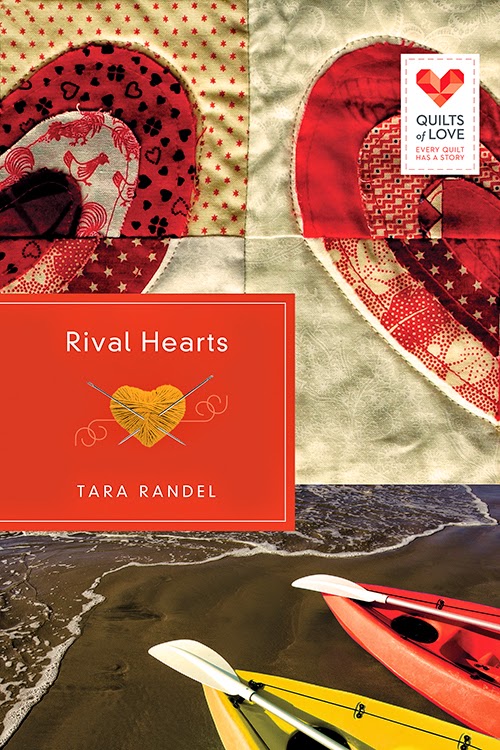 Proving that quilts have a place even in the modern, corporate world, author Tara Randel spins an adventurous love story for us in Rival Hearts

Holly, who wears glasses and hides her extra pounds with boxy clothes, is editor of a quilting magazine.  She's working on a really special quilt project in conjunction with her readership.

Ben heads up the organization's outdoor magazine.  He's a handsome former TV personality, and an accomplished traveler and sportsman.

Their boss wants to start a new magazine and can't decide which of them to promote to lead it, so he arranges a little competition:  Ben must make a quilt, and Holly must represent the publishing company in a kayaking event.

The two have never worked together before, and now they find themselves facing off over the promotion they both want.  Only, during the course of their competition, they learn enough about each other to begin to respect one another.  It makes things more complicated.  How can you celebrate a victory at your friend's expense?

There's a classic "caterpillar into a butterfly" scene when Ben and Holly are asked to take their boss' place at an awards dinner while he is out of town.  Holly's assistant takes her shopping for a pretty dress, Holly wears contacts instead of glasses, the kayaking lessons have firmed up her arms, and suddenly Ben sees her in a whole new way.

Just as things start getting interesting between Holly and Ben, someone sabotages Holly's special project.  Would Ben do such a thing to win the promotion?  The reader can easily guess who really did it, but Holly is not so sure.  Will Holly's lack of faith in Ben destroy their budding romance?

This is one of those books you want to see become a series.  I'd love to have Tara Randel tell us more about the relationship between Holly's brother and Holly's assistant in a subsequent book. Rival Hearts

is available in paperback or Kindle formats.


Don’t miss this month’s Quilts of Love book, Rival Hearts, by Tara Randel. Who doesn't like a friendly competition, every now and then? You'll be sure to love this fun tale of unexpected competition between two people forced out of their comfort zone.

Celebrate June's release by entering to win a summer camping kit (grill, tent, and camp chairs) from Quilts of Love.

One winner will receive:
Enter today by clicking one of the icons below. But hurry, the giveaway ends on July 13. Winner will be announced on the Quilts of Love blog.

Spread the word—tell your friends about the giveaway via FACEBOOK or TWITTER and increase your chances of winning.