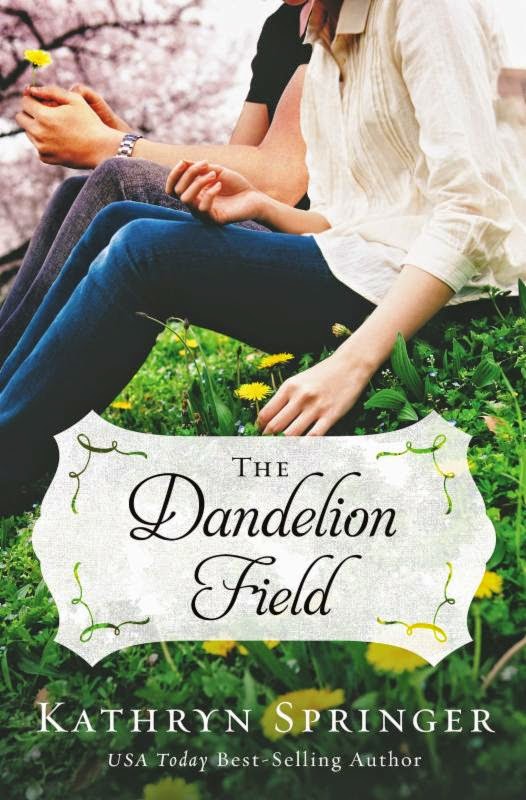 This was a great book!  Author Kathryn Springer creates deep and interesting characters that I could really relate to.  Single mom, teen pregnancy, firefighter with a hero complex, maybe I liked The Dandelion Field

so much because it was familiar ground for me.

Evie, who lost her firefighter husband, pours herself into raising their son, Cody, with the help of another firefighter, Dan, who's help she welcomes, but emotionally, she keeps him at arms length.

Gin's mother had a hard life, and Gin was raised in difficult circumstances.  Him mistrust of men was furthered when she turned up pregnant and was left once again, with no one to help her raise Raine on her own.

Gin and Raine have lived a vagabond life, always ready to pick up and move on.  When they land in Banister Falls, Raine pleads with her mom to stay so she can finish her senior year of high school in one place.

Raine and Cody meet in class and when they announce their pregnancy, the two single moms from different worlds clash.  Dan acts as a buffer between the two, a good guy who has Cody's best interests at heart, and wants to see the best possible outcome for the situation.

Dan has always pined for Evie, but now he is drawn to strong, but brittle Gin, who thinks she's not good enough for him.  Evie panics when she sees herself losing Dan, and tries an awkward seduction that flops.

As graduation approaches, Raine learns that Cody has received a full 4 year scholarship that he didn't tell her about.  She breaks up with him because she doesn't want him to miss out on this opportunity and resent her and the baby later in life.

Raine and Gin make plans to leave town after graduation, feeling Banister Falls has nothing left for them.  But despite Gin's attempts to stay disconnected, she finds herself running a friend's business and helping out a young mom in trouble.  As the time comes, it's hard to leave, but she thinks it's for the best.

This was a sweet story that I really enjoyed.

Get ready for Valentine's Day with a new story of romance and falling in love in Kathryn Springer's The Dandelion Field. The handsome firefighter makes a living “coming to the rescue,” but Gin is used to fighting her own battles. Can a woman who doesn't believe in happy endings take a chance on a new beginning?

Celebrate a second chance at love and family with Kathryn by entering her Kindle Fire giveaway!

One grand prize winner will receive:
Enter today by clicking the icon below. But hurry, the giveaway ends on February 15th. Winner will be announced February 16th on the Litfuse blog.