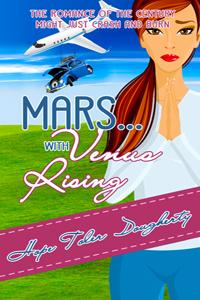 You know the scene in Pride & Prejudice where Mr. Darcy is practicing his fencing and says, "I shall conquer this!  I shall!" referring of course to his feelings for Elizabeth Bennett?  There's a modern day version of that in Mars with Venus Rising.

New to town, John is holding himself back from his attraction to the skittish Penn Davenport.  Penn lives with her aunts, and has since her parents died in a plane crash.  The aunts, Winnie and Jancie, are a hoot.  They're in full on matchmaker mode, but Penn is having none of it.

She starts to get to know John when they're thrown together through serving on the Apple Fest committee.  She might even like him a little, maybe.  Until she finds out... he's a pilot.

Mars with Venus Rising is the tale of a woman overcoming childhood trauma and a very patient man.  John is almost too good to be true in the way that he challenges Penn but never pushes her.  Perhaps author Hope Toler Dougherty giving him a limp makes him seem a little more realistic, since we all have some flaws.

This is a cute, G rated story, which I will be happy to pass on to my teen daughter, Brianna.

Travel to the small town of Mars, where you'll find a meddling horse, paper bag floors, and a flying saucer on the town square—in Hope Toler Dougherty's book, Mars . . . with Venus Rising. Penn Davenport dreams of passing the CPA exam and moving away from the two aunts who reared her after her parents died in a plane crash. When John Townsend—full of life and the joy of living—moves to town, he rattles Penn's view of herself, her life, and her dreams . . . which isn’t such a bad thing until she falls for him and discovers he’s a pilot.

One grand prize winner will receive:
Enter today by clicking the icon below. But hurry! The giveaway ends on May 18th. The winner will be announced May 19th on Hope's blog.