Our Week with a Surprise Doctor Visit 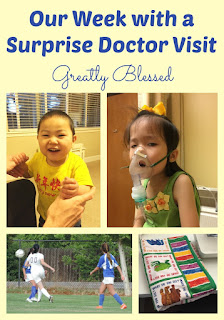 This ended up being a busy week!  For only having a couple things on the calendar, that is.  We didn't get as much schooling done as I would have liked. 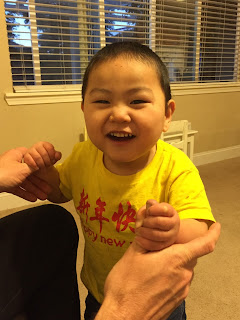 Luke had his neurologist appointment on Monday.  Nothing new there.  The new neuro felt he should be in Physical Therapy, but honestly, he never met a single one of the PT goals on his IFSP in EI, and I think he met one PT goal on his IEP in school last year.

In contrast, Luke came home from his 4 months away having learned to scoot around the house on his bottom, and he has recently learned how to sit from standing.  Not from 25 minutes of PT a week (which he's no longer getting), but because I stand him up to pull up his pants/shorts after changing his diaper, and leave him in a standing position to strengthen his legs.  He's not crazy about standing, so he learned to let go of the crib bars and sit himself down. 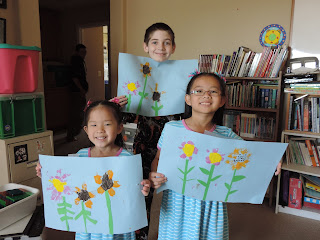 If you missed it, we did a spring flowers art project that was a lot of fun. 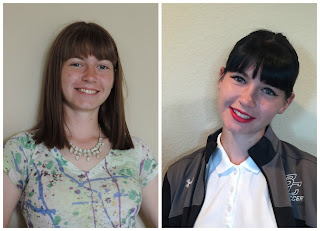 Hmm, notice anything different?  She had a friend dye her hair for her.  She's planning to do color over the summer, but hair must be a "natural hair color" during the school year. 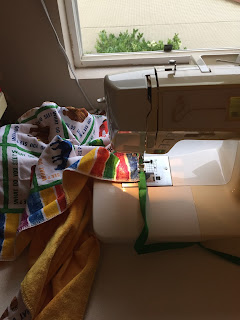 I spent some time in the sewing room and made a blanket for Project Linus.  I used to make blankets for them several years ago, but between life being overwhelming and the sewing room being so full of junk, I quit.  Feels good to be able to participate again. 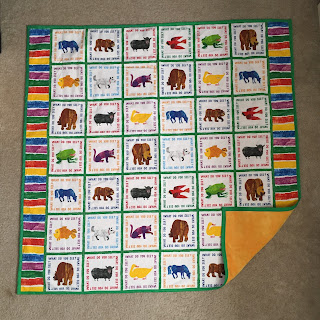 Front is a Brown Bear Brown Bear What Do You See? print, back is golden yellow minkee. 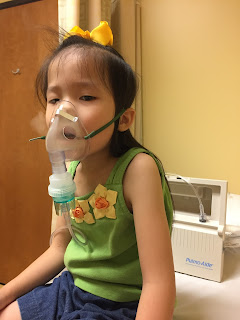 Tuesday we ended up with a surprise 2+ hour doctor's visit.  Katie was coughing a little on Monday, and woke up wheezing on Tuesday.  She's doing better now, but she was really having a hard time for a while.  If it doesn't sound too terrible for me to say this, I'm grateful for the chance we had to hang out just the two of us, and snuggle.  And laugh with the x-ray tech, who gave Katie 4 princess stickers for being such a rock star patient. 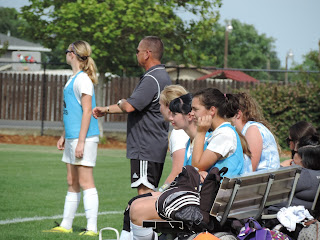 Wednesday was Brianna's last Home soccer game.  They're doing well, so there will be some playoffs, but the season is drawing to a close. 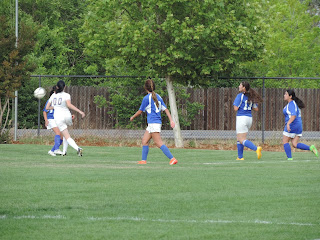 And there she is!  00 in the white uniform.  The uniforms are numbered by size, so she's the team peanut.  She didn't get much playing time, but I'm glad I got to go see her play. 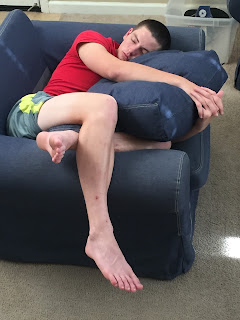 As for this guy, swim has ended (all but the banquet).  With only 4 weeks of school left, he's focusing on making sure he passes all his classes. 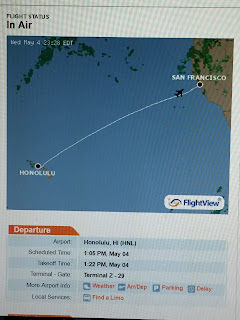 Something else very exciting happened Wednesday night.  Annaliese flew back to the USA.  We're looking forward to seeing her for Sam's graduation. 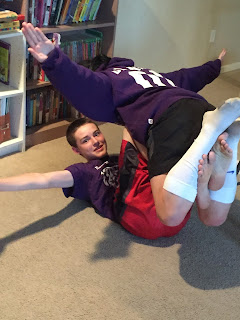 Do you do the airplane game at your house?  I used to do it with all my babies and toddlers.  Bri still does it with Katie once in a while.  Well, Eli's got some strong legs, because he's lifting Brianna!

In school this week, we covered our 3rd president, the Haitian Revolt, and the Industrial Revolution.  We also covered the Louisiana Purchase.  I learned which president made the purchase, who he bought it from, and why the seller needed cash.  Somehow I missed all of that when I was in school!  We also gave a carrot blue dye to drink for a couple days and then cut it open to see the dye creeping up the inside.  I didn't get a picture of that, but it was pretty cool.

Next week we'll learn about Lewis and Clark, more about Napoleon, and begin learning how to research and write state reports.