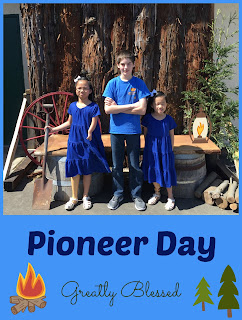 We got the opportunity to go to Pioneer Day at the school the younger kids will be attending in the fall.  I thought this would be a fun way for them to dip their toes in and meet some of the other children there. 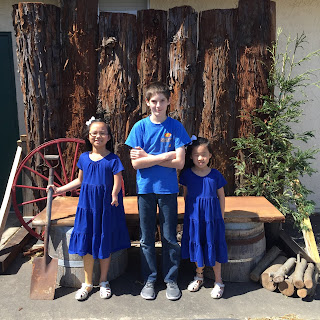 Jack, who is not keen on the idea of going to school, was less than thrilled.  But by the end of the day, he admitted that he had fun.

First there was a parade.  Almost every student and faculty member was dressed in period wear.  Lots of bonnets and cowboy hats, and even a coonskin cap!  Some of the classes sang songs from the pioneer era, and there were old time hymns playing as background music to later activities.  At one point, I started singing, and the kids whipped their heads around and said, "You know this song?"  I'm not sure whether they thought I was as old as the pioneers, or if they were just surprised I might know something they didn't. 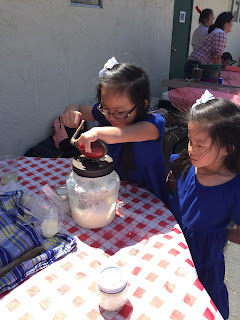 Each of the classrooms had various "hands on" activities the kids could do, such as churning butter, tin punching, gold panning, etc.  I'm totally counting this as a history field trip. 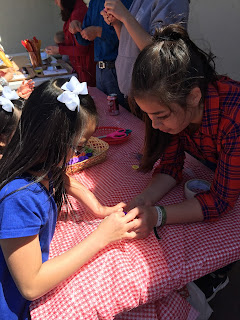 They made Whirlygigs (buttons you spin on string) with the help of a couple older students. 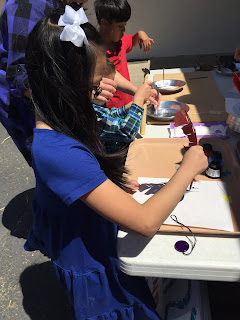 And they got to write with quill and ink. 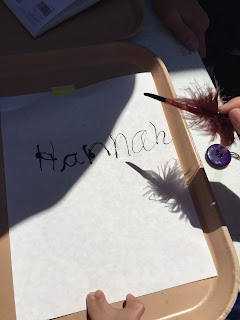 We've done feather writing at home before, but these were bigger, nicer feathers. 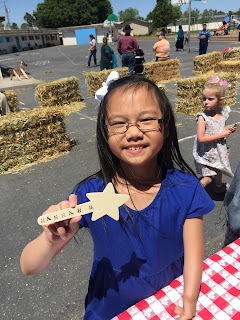 At the station where we learned about cattle branding, the kids got to "brand" sticks with stamps.

There were some missions on display, built by the 4th graders.  Also not pictured was the table where the kids got to plant cucumber seeds.  If the tomatoes (from Earth Day) and the cucumbers that the girls planted both grow, we'll have the makings of a great salad! 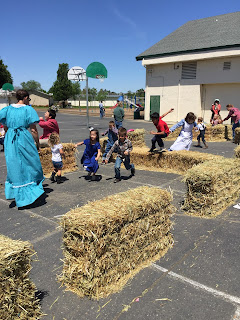 Katie participated in one of the races.  All 3 kids had fun playing on the playground, and throwing balls and messing with the lassos.  I got to see Hannah send a basketball soaring through the hoop!  I was so proud of her.

In short, a good time was had by all.  Jack and I came home a little sunburned, but it was worth it.  Note to self, it's now sunscreen season all the sudden!

I don't know if this is an annual event or not, but if it is, I'll have to make the girls costumes for the next one.