Weekly Wrap Up - Antarctica week one

Originally, when I read through the list of countries we'd be studying this year, I thought, "Antarctica?  What is there to learn about Antarctica?  There's nothing there!"

It's the forgotten continent in many ways.  In fact, Sam told me he "corrected" his teacher when she told her class that Australia was the least populated continent.  I can't imagine Teach was too thrilled about that, ya know?

There is no currency, no government, no religion, no capitol, no flag.
So what did we do this week? 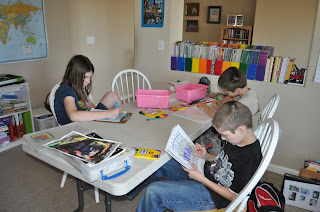 Well, the kids colored coloring sheets for the fair. 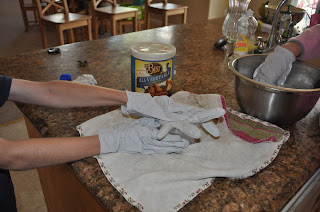 Studying about arctic and antarctic animals, we did an experiment to illustrate the insulating power of blubber. 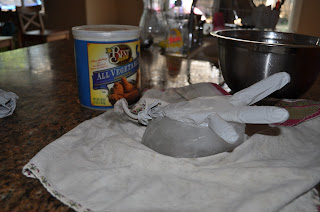 It's one thing to read, "Blubber helps keep penguins warm," but it's way more memorable when you can feel the difference yourself. 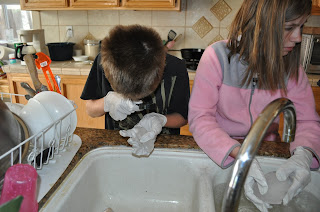 I love it when my kids say, "Can I go get a magnifying glass?"
Let me think about that... "YES!"
Eli discovered lines and bubbles in his ice. 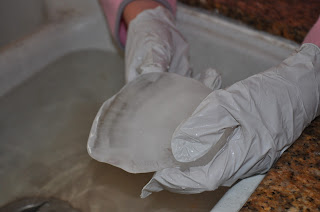 Someone dropped our iceberg, which broke into bergs and growlers all over the kitchen floor, but we still managed to float the largest piece in the sink, and were surprised at just how much of the berg is below the surface of the water, compared to how much is above the water line. 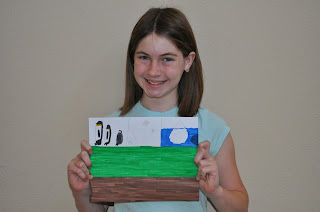 Since Antarctica has no flag, we designed our own flags for it.
Brianna's stripes represent the land under the ice, and the upper right is an iceberg in the water.  The upper left is 2 types of penguins. 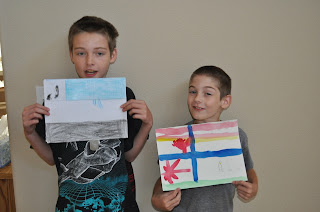 Eli showing his draft version, and a rotten picture of Jack with his painted flag.  I told them they could use any media for this project.  I was expecting someone to use cut stripes of construction paper, but no one did.  Jack's flag incorporates bits of the flags from some of the several countries that maintain bases on Antarctica!  I thought that was pretty clever.  We were all a little surprised to find India on that list. 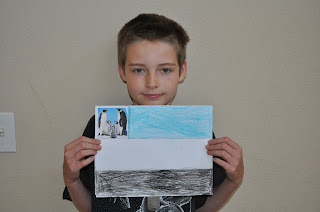 And Eli's final version.  He printed the penguins and pasted them on.

Now we're looking forward to our LAST SCHEDULED WEEK OF SCHOOL.
I'm ready.
Ready to be done.
Ready to see how many more countries they can locate on their post test maps than their pretest maps.
Ready to close the book on spelling.
Ready to cancel our monthly Aleks subscriptions.
Ready to open the last Little Passports package.
Ready to watch March of the Penguins and call it school.

As much fun as this year has been,
and it really has been fun,
I'm ready for a little break from school.

Fortunately, I'm just as excited about next year.
I hope to be able to order our curriculum for next year in July so I have plenty of time to create a better planner/record keeping solution for us.  I've always used a teacher plan book, but that wouldn't have worked this year, so I ended up just saving all my marked up photocopies in a folder, but I'd really like to make something a little more tailor made to our needs for next year.  I have a couple ideas, I just need the time to execute them.  I am hoping to spend some quality time at Staples concocting my masterpiece.

In other news, we found The Dress for Annaliese's graduation yesterday.  Glad to have that settled, she graduates on Thursday!